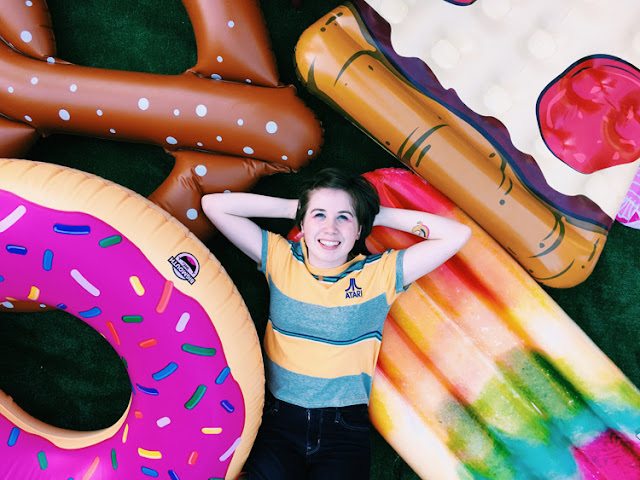 Whew! We did it! We are officially done with Graduation season and feel like we finished it with a flash of color and fun! With friends and family in our little backyard we were able to celebrate Sam! There were some fun little details that went into it that I thought I would share here. 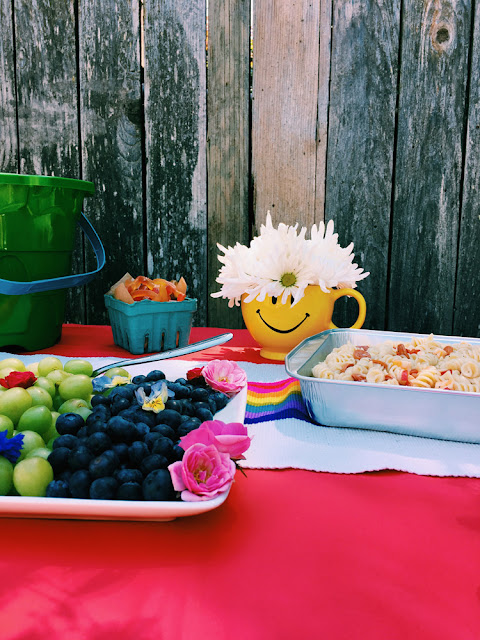 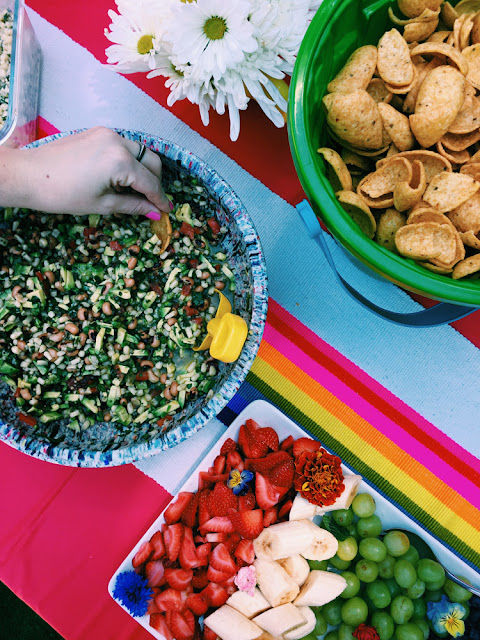 When Sam and I started talking about her party we started with a theme and a few elements to build it on. One of the first things we pulled was this funny little mug her Grandmother had sent, then thrifted a few more for arrangements around the food tables. Some salads, a bucket of cheese popcorn and a five pound bag of gummy worms that we scattered around (and completely went through!) and we were set for snacks. (one of the salads that everyone loved is this Grilled Mexican Corn Salad from food blogger Freutcake!) 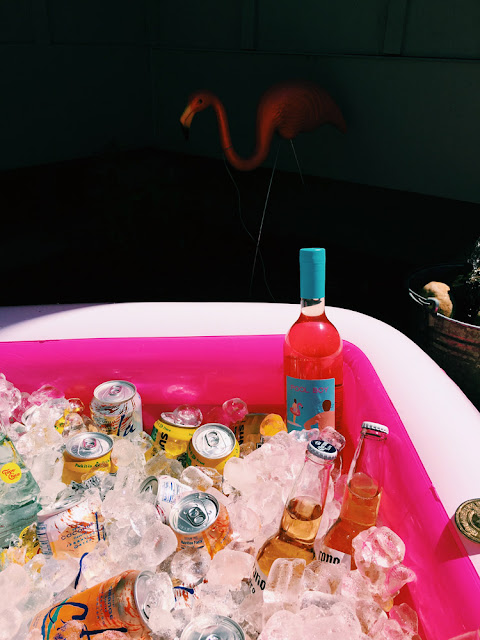 The next idea we landed on was one of a pool party since we have a group of pool floats that we thought would be fun for decor. Steve and I bought a small pool, filled it with drinks and ice, and voila! And can I tell you how excited I was to find a rose named Pool Boy?!  We attached a bottle opener to the flamingo keeping watch in the background and we were set there! 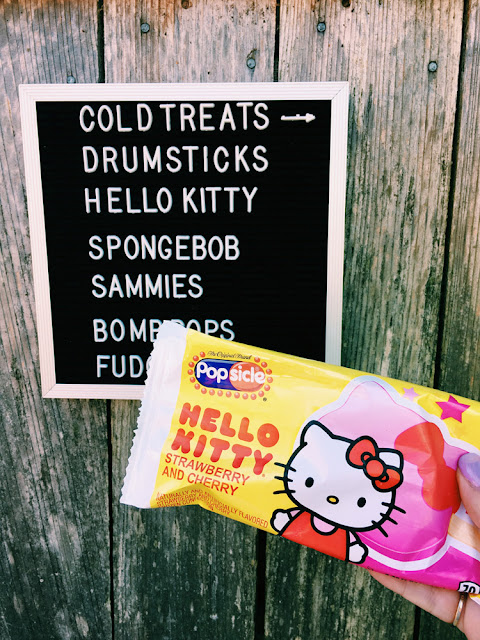 The next thing I was pretty set on was fun ice cream treats. We ended up flagging down our sweet ice cream "lady" and bought some treats directly from her that we couldn't find at our local grocery stores and then mixed them with the usual suspects. Steve came up with the funny idea of just placing our small extra freezer in the backyard for a help yourself situation witch was so much fun we have joked that we will keep it there all summer! 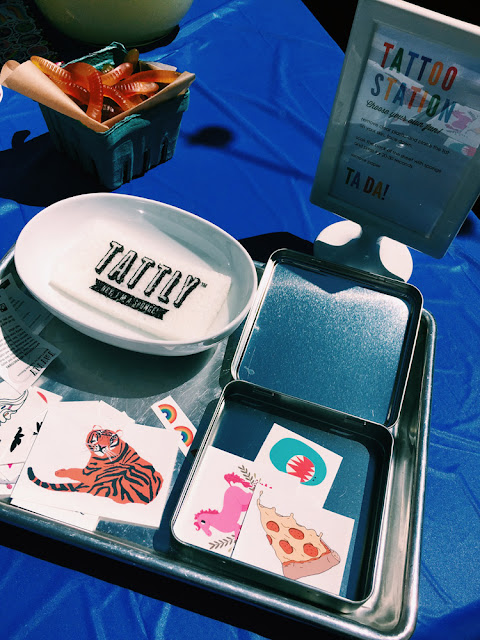 The last element that I really wanted was a Tattly tattoo station. We have included Tattly's in most of our recent parties and they were just as much a hit at this one as others. It's always a great mixer, and we love seeing what people pick. We are thinking of sending Sam to college with a mix of them so that she can set them out in her dorm for an easy talking point! 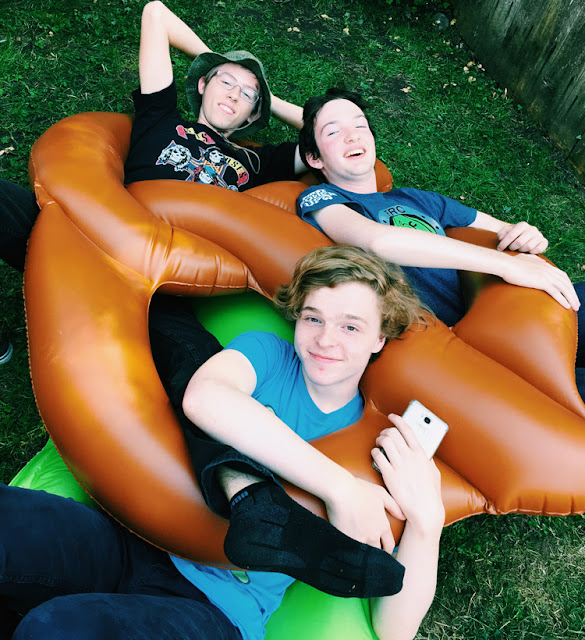 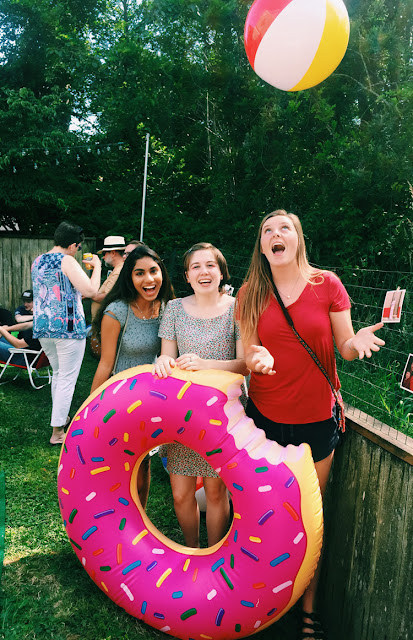 What else does a party need? Just friends. Friends that are ready to relax, mix and mingle, and just celebrate with you. It was amazing to have friends here that have been with Sam since preschool! 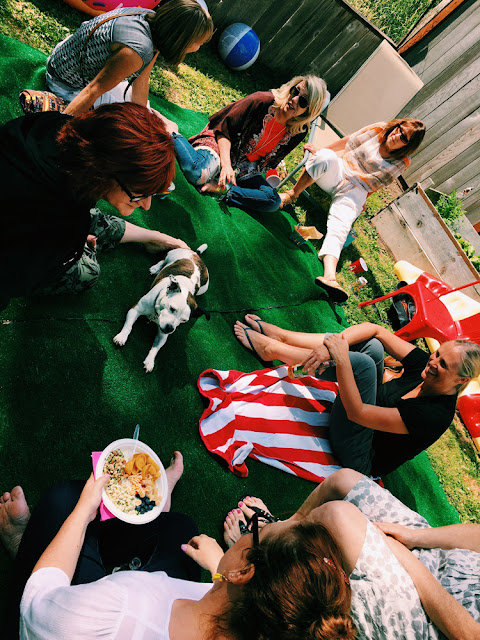 And for me its was wonderful to have friends there from college, from baby group, and from my work. If we didn't have people to share this crazy ride it just wouldn't have been the same. And it's what makes party planning so fun. 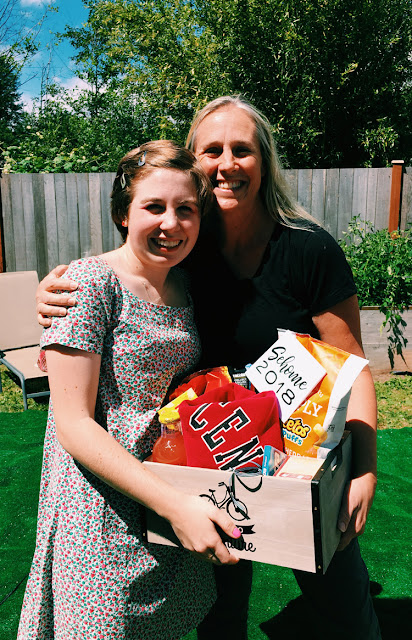 Yes, we were celebrating Sam. We were also celebrating all those that have been there supporting us, figuring out things with us, and helping us get there. That is what made all this so much fun!


SaveSave
Posted by Tammy T at 6:00 AM No comments:

Email ThisBlogThis!Share to TwitterShare to FacebookShare to Pinterest
Labels: Setting the Scene

I don't know about you, but life has been a bit crazy for us over here! With Sam graduating, Kate moving back, Steve's family in town, a party to plan, and other things we have a lot going on. You are left with a pair of two completely stressed out people. It used to be that I could put on a sappy movie, cry my eyes out and feel better. This time around I wanted something a little more active that would really work out some of these feelings I have been either holding back, or that have been simmering right below the surface. 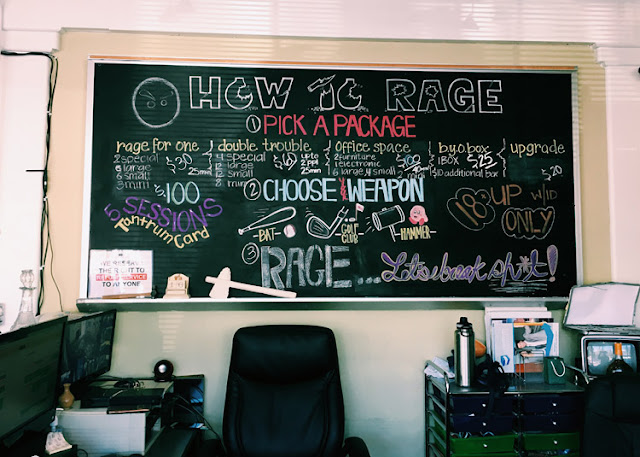 That's where Rage Industry comes in. Steve and I read about it some months ago, and were recently reminded of it when they did something similar on an episode of the Bachelorette. We figured this would be just the ticket for a fun date that would help us both work through some extreme emotions. We booked the Double Trouble service and headed down to Seattle for some fun! 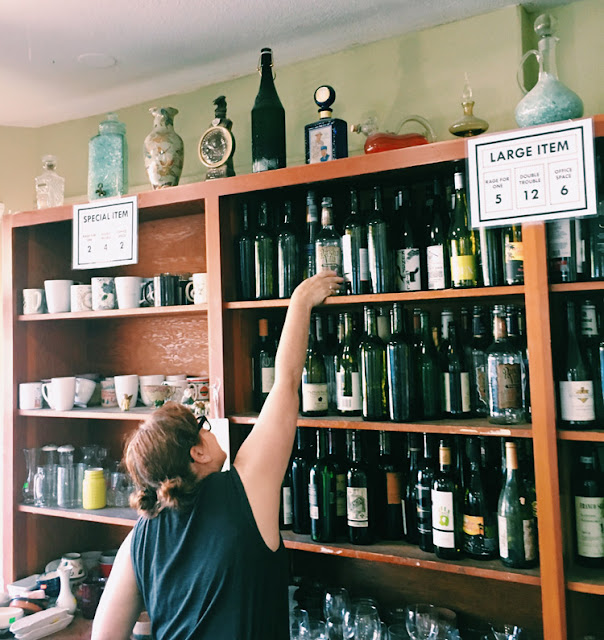 We were greeted by Leslie, the owner and found that they have been open about a year (since April 2017). She said that things have been going well, as we would imagine since there are so many things to be angry or frustrated about these days. We were shown the wall where you chose your items (we were allocated 36 for our scheduled time) and got down to business. 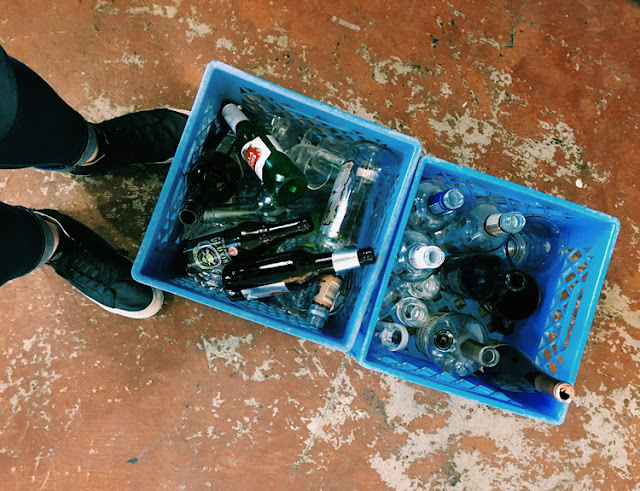 Steve and I each had a crate to fill and got down to business. We chose a mix of beer, wine and other items to break. I found a couple of heavy ashtrays (that were amazing to go after with a sledgehammer!) and we ended up adding a couple of large vases from a dollar pile that were very satisfying to smash. 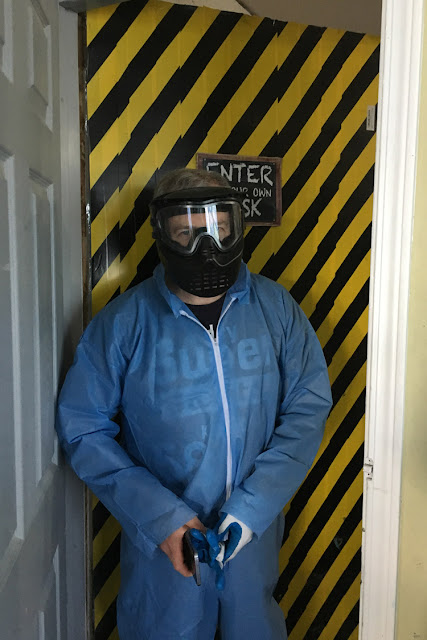 Before you head back to the room where you go crazy you are given safety gear and a locker to store your things. You are encouraged to make a playlist that you can synch to a waiting speaker that they thankfully set up for you since you are a bit goofy with all the gear. There is a wall of "weapons" that you can choose from that ranges from sledgehammers, golf clubs, bats and a crowbar. Once they start the timer you get to it! 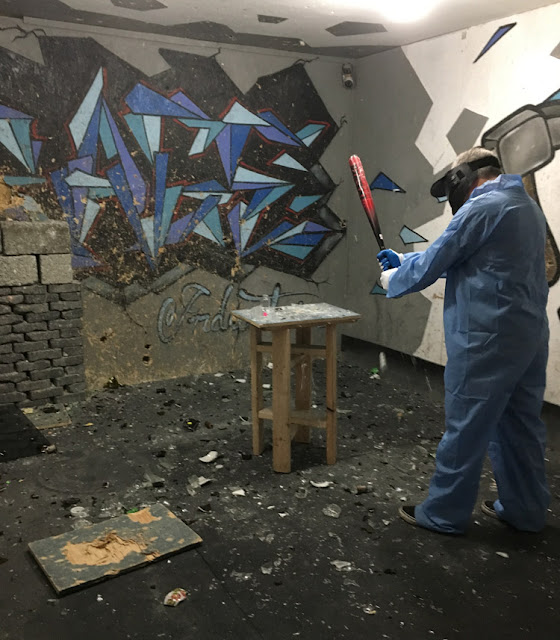 There are a couple of surfaces available to "rage" on, including a stack of tires that you can use to stack items on or just go crazy on! It was crazy to see what broke easily, what would shatter allover the room, and how quickly the time went and how sweaty and spent we were in the time allotted. 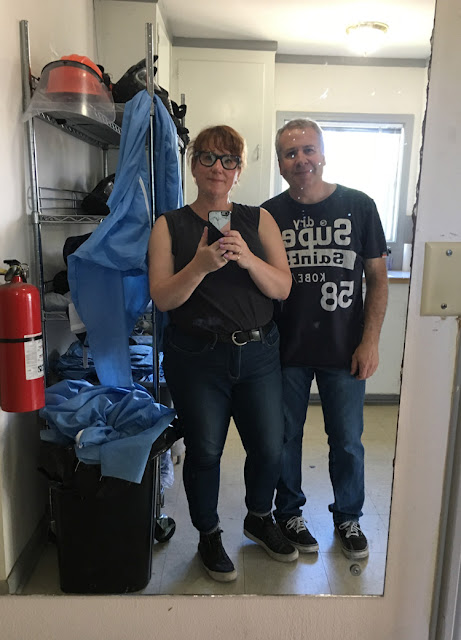 This is us straight after. Can you see the steam in my glasses? We are unhurt and feeling like we left it in the Rage room. I would say it was better for me at this time than a sad movie as far as working through some emotions. It was a great date for us at this stage in our marriage and I think it would be an incredible way to learn about someone early in a relationship! I may also send Steve back for some time there alone to just go crazy by himself when work stress is getting to him. And I can think of all sorts of occasions to give a give certificate from there. What do you think? Would you try it?
Posted by Tammy T at 6:00 AM No comments:

Like many of you I have been doing a lot of reading following the deaths of Kate Spade and Anthony Bourdain. I could say I have been struggling to understand, but as someone that has experienced depression and is familiar with mental health issues I sadly find it not to much of a reach. 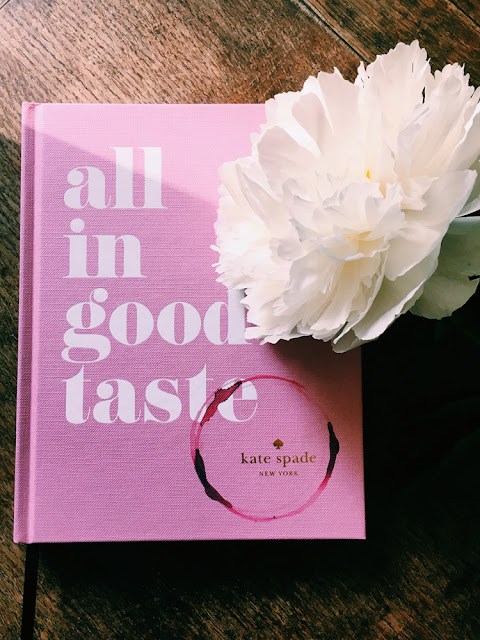 Life is hard. It's a struggle and it can be scary and difficult at times. When I have been in the midst of depression it's like a big cloud descends and I feel nothing. No joy, no light. Just grey. And once that hits it's hard to reach out. You know what you should do, but you just don't have the energy or frankly the will to do those things. 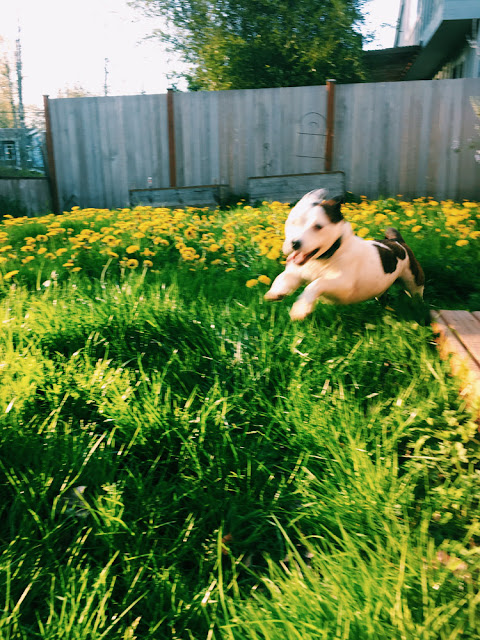 I can't even tell you what prompts me to tend to myself in these moments. I do know that having touched the depths, I feel like I can appreciate the highs a bit more. Much like the ease of water when you are thirsty. I wouldn't wish depression on anyone, but I understand it makes me who I am. 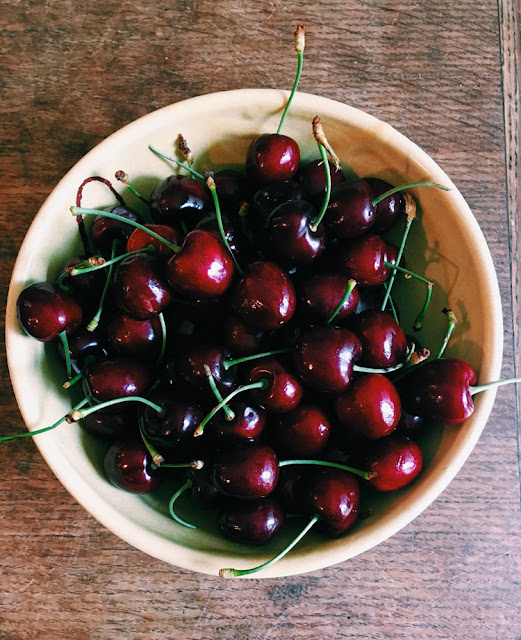 I think I appreciate most the posts that encourage us to pay attention to others. Not just the ones that appear to be in pain, but to all we hold dear. I was first diagnosed by a therapist that suggested that I laughed far too much in a way that seemed false. He was right. It was a front that I has found easy to put up.

I don't have much to add to the conversation. Just that I will be watching my friends and hugging more freely, and hope you will too. I found the following quote in one of the many discussions and thought it was fitting.

Let everything happen to you. Beauty and terror. Just keep going. No feeling is final.

-Rainer Maria Rilke
Posted by Tammy T at 6:00 AM 2 comments:

On My Rader: A Modern Take on Class Jewelry by GLDN 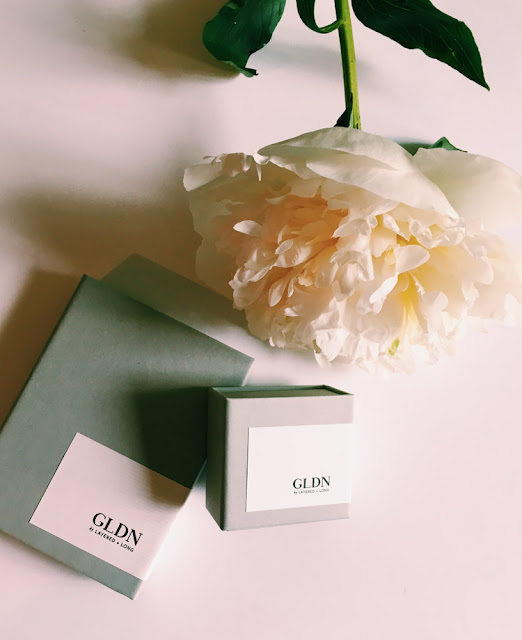 During this year a lot of information came home with regards to graduation. When the packet came home with all the deets for Sam's graduation gown and cap it also came with an order form for class rings. Sam was not impressed with what was on offer, though we both thought it would be nice to have a piece of jewelry to mark the occasion.

During a conversation with my lovely friend Emma that works at GLDN we both realized that there were pieces they offer that would be perfect as a modern take on class jewelry. Rings and necklaces that you would want to wear everyday rather than just bring out for reunions. We found there were quite a few pieces that would lend themselves perfectly to commemorate ones graduation while still be modern enough to wear every day. 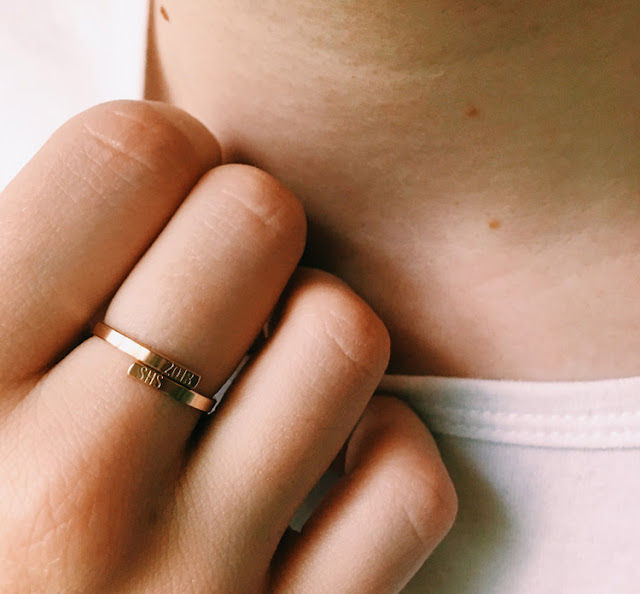 So GLDN kindly gifted Sam with a couple of pieces which I thought I would share here! She is so excited she hasn't taken them off since she opened the box! The first piece she chose was the Personalized Memoire Ring. She is able to have a subtle piece that celebrates her graduation that she can wear anytime. And if her reaction to it is any indication she will be wearing it daily! 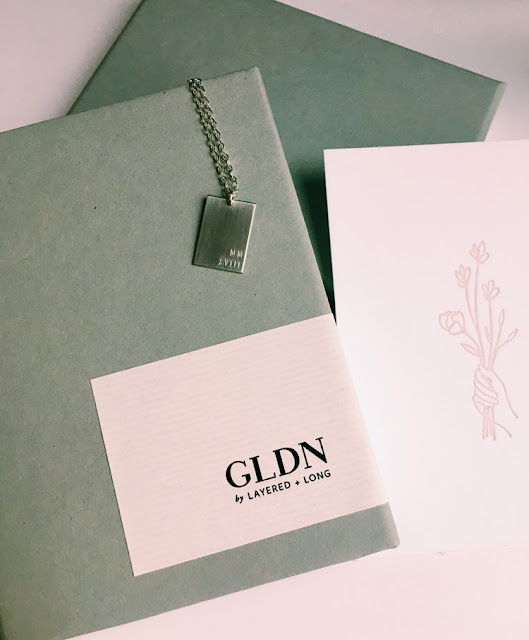 The next piece Sam chose was the Personalized Marseille Pendant Necklace. This time she decided to have 2018 set in Roman numerals and it turned out so beautifully. My photo doesn't do it justice. Again, it's one that she can wear anytime and feel cool. And I like that these pieces feel like the start of a jewelry wardrobe. Pieces that you can collect over time and wear forever. 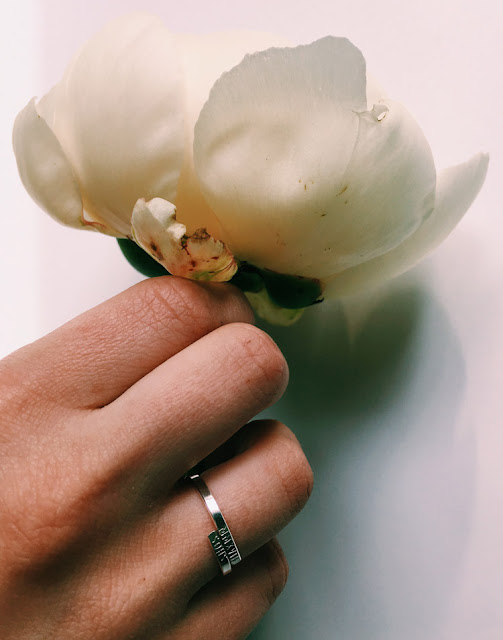 A friend overheard our planning and decided to order a couple of pieces for her daughter. She also chose the Personalized Memoire Ring but decided to do it in a different finish, font, and use Roman numerals. I love that while they are both subtle they have a very personal feel to both. (Again my photo doesn't do this ring justice!) 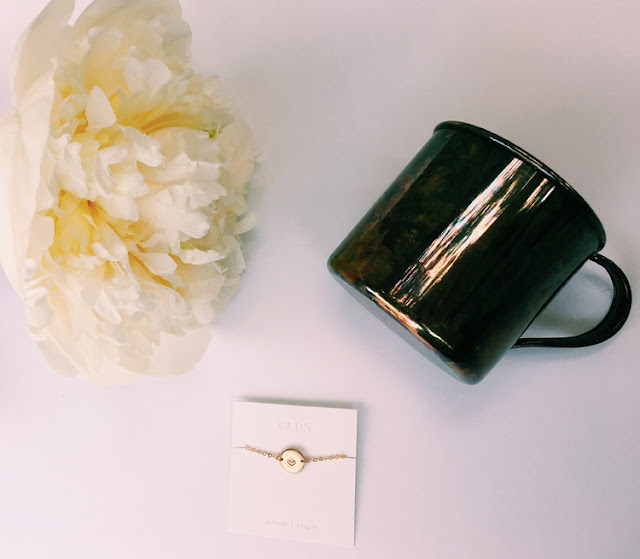 My friend ordered a second piece for her daughter as well. We were talking about all the feelings we are having about our girls leaving for college and she decided she wanted a piece that would remind her daughter that she was always with her. So she decided on the Mila Disk Bracelet with a simple heart design.

Sam is considering the Kissy Face Friendship Set as a graduation gift for a friend that she will be away from when she leaves for college. It would be a modern and cool update on the "best friends" necklace from junior high!

This idea turned out even better than I could imagine. Everything is made in La Conner by hand and all the pieces come on a card signed by the maker. And the fun part? GLDN has extended an offer of $5 off any order (expires July 1st). Just include the promo code GRAD2018. Let me know if you decide to try them!