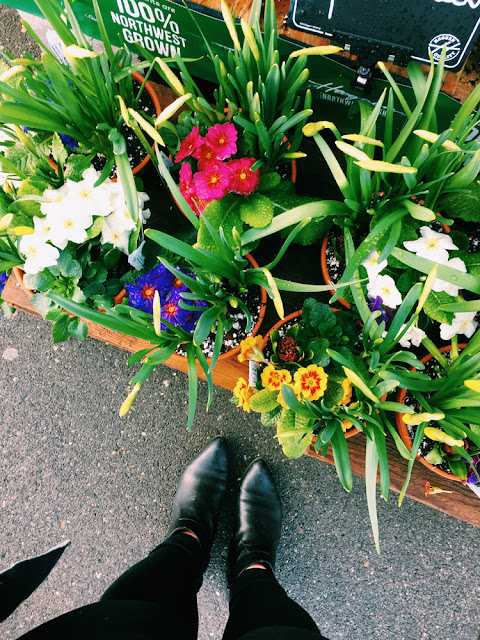 Spring is here, and yet I still feel like I'd rather be cuddled up on the couch watching Netflix. With the crazy weather here that moves between sun and freezing rain one can feel a little nutty and off kilter. Throw in a little seasonal affective disorder and things can get really stupid. I have a few ideas of how to combat the ugly feelings until ready to fully embrace spring and all the good things it holds. 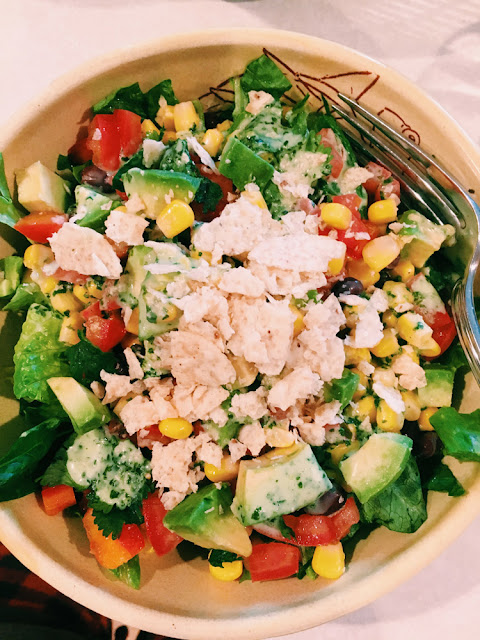 Eat Well: When I'm depressed I would love to just bury my head in a bag of potato chips. But that leaves me feeling even worse than before. Instead we try and be sure to eat fresh foods and as many veggies as possible. Favorites around here are buddha bowls...a mix of a grain, a protein, veggies and dressing. And a great grab and go breakfast are overnight oats...easy to change up to have many different flavor profiles.

Schedule: Staying to a schedule helps me keep from just staying in my pajamas or sweats all day. My mom used to say do one chore and one fun thing a day and that seems to be pretty good advice. If I can accomplish something and have one fun thing to look forward to it keeps me moving forward. 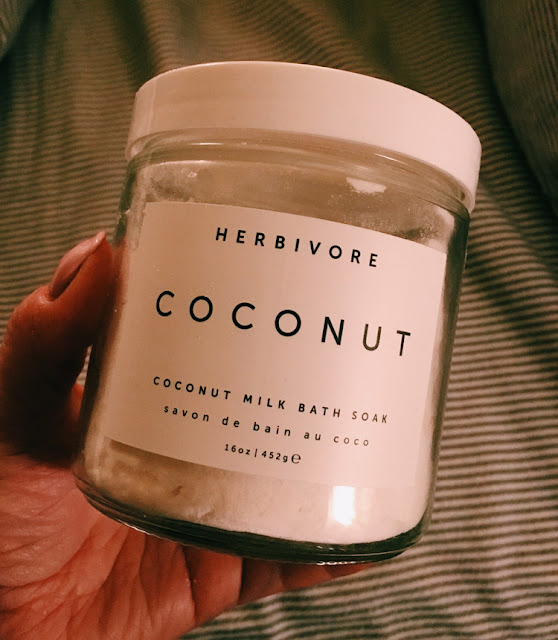 Self-care: I know the this word is getting overused, but it truly is important. And it looks different for everyone. A favorite for me is a bath in my most favorite coconut milk bath soak from Herbivore Botanicals. Reading or a movie are other ways I keep myself reasonably happy while I wait for my creative spark to return.

Support: I feel so lucky to have friends and family that understand and support me when I'm blue. At work we have a happy light on all day. We also have a station of essential oils available for all that ails us. My husband is the best at just being there when I need him. He doesn't try to fix things, just runs the bath, makes the dinner, or gives the hugs. 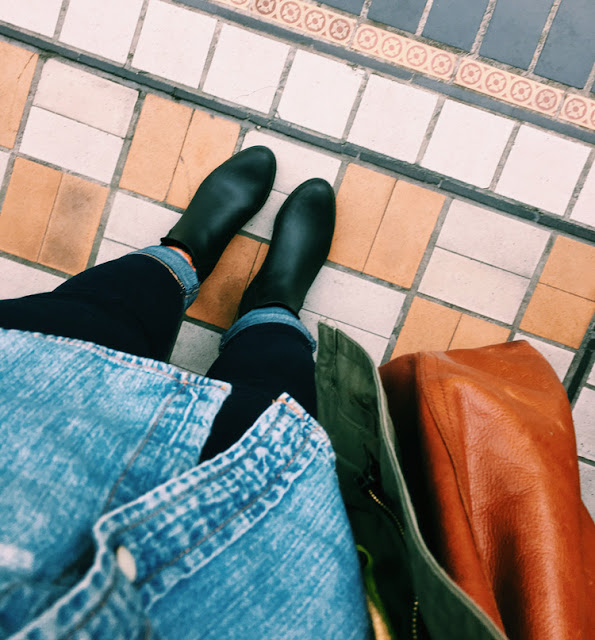 The last thing I do? Plan ahead. I know this is just something to go thru and that it will truly feel like Spring to me soon enough. Having things to look forward will help to get me there. Right now there is a visit to SAM on the calendar along with a visit to the new juice place in Bellingham and maybe a drink (or two) at the new tiki bar that has opened.

I have decided to treat these blues as a downtime. A time of conserving energy before getting out there again. A quote that I have seen on pinterest says "There is nothing in nature that blooms all year long. So don't expect yourself to do so either." So, I don't beat myself up about them and I hope if you suffer with me that you don't. And that everyone watches out when we are operating at full power!
Posted by Tammy T at 6:00 AM No comments:

Deep Thoughts: Getting Out of Your Comfort Zone 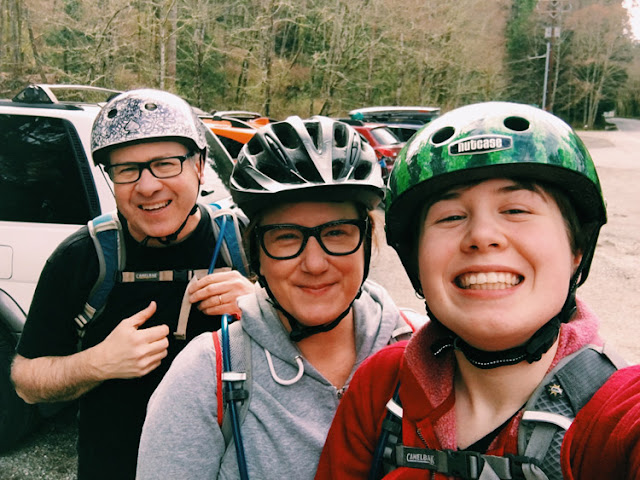 Today I did something that may seem unremarkable to some, but to me it felt like a big step. I stepped out of my comfort zone and went mountain biking. I believe the last time I went was before Steve & I were married and let's just say it didn't go well. There was lot's of mud and crashing and lots and lots of swearing. All of it me. I think I even threw the bike at him at one point. I decided then and there that it wasn't my thing and never looked back. 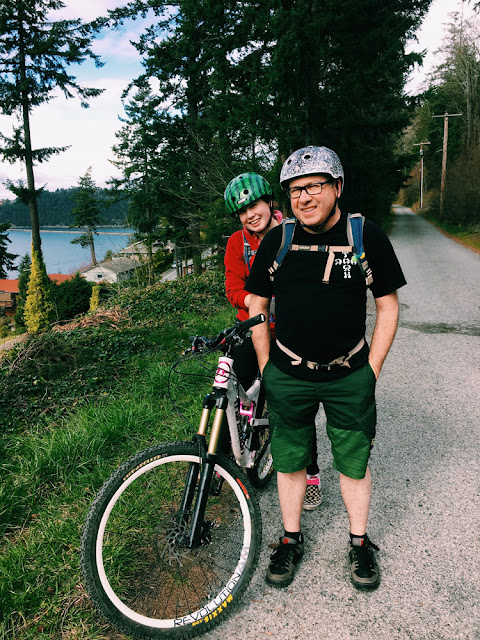 Mountain biking is a huge part of Steve's life. Our daughters love it too. We live in a wonderful area full of trails. Steve is always great about taking part in the things I love. He's been wanting me to join them for a while. So I decided I would go for it. 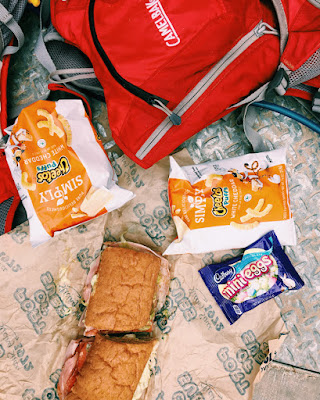 Today we decided to take an easy ride on the Interurban Trail to Larabee State park. It was about a six mile ride all around. We found an spot on the trail with a view to have a quick bite to eat before heading back. What is it about eating outside that makes food taste better? 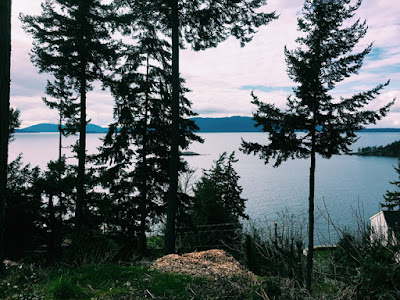 The views were gorgeous from the bike. There were small waterfalls, views of the bay from the trail, and the smell of campfires in the air. It really is a wonderful way to experience the area. Watching Steve enjoying the thing he loves is pretty special too. 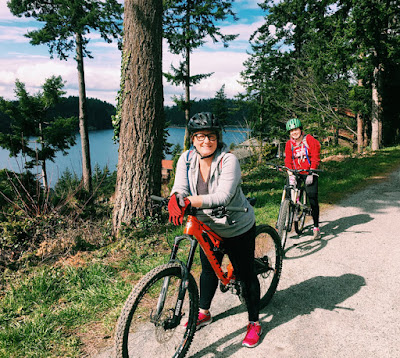 Hanging out with the two of them on bikes was really fun. I don't know if I would make it a regular thing, but I'm not as scared of it anymore. I would definitely do it again and try an even longer ride. 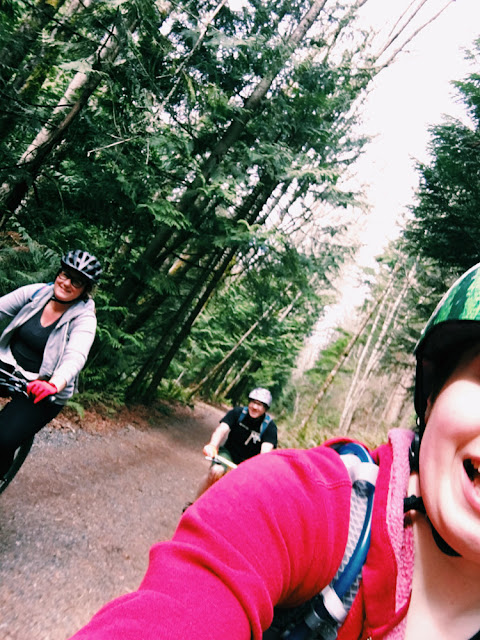 Pushing myself out of my comfort zone gave me some special time with Steve and Sam I would have missed. I feel proud for something again that used to really scare me. I'm trying to make sure that I don't miss out on anything. Life feels too short. And this is a start.
SaveSave
Posted by Tammy T at 6:00 AM 2 comments:

Recently it was brought to my attention that there is a conversation that still needs to take place, both with my girls and among my friends. That conversation happens to be about sex. It's one I had assumed I had already covered with my daughters. We had always had open and honest conversations about sex and dating.

It turns out that this conversation never ends, and there is still a lot to to talk about. I found this out when we read a book called Girls & Sex:Navigating the Complicated New Landscape with my book group. This of course led to an animated discussion of what this "new landscape" might look like. Which led to a discussion of what changes need to come.

The reading of the first book led to another book by Al Vernacchio. He wrote a book called For Goodness Sex which challenges the way we teach sex education. He is the sex educator that is proposing that we discuss sex with the metaphor of pizza rather than as baseball. We suggest we should be approaching sex in a way that is respectful and requires communication rather than competition.  I could never be as simply eloquent as him so I have attached a link to his Ted Talk here. I agree with him wholeheartedly. And who doesn't love pizza?

What I have found so interesting when talking about this with friends is the response among them. It turns out we all need to continue to have conversations about sex. And there is always something to learn about how we approach it. I hope that the pizza model takes hold. And I hope we all continue to have open conversation about things that matter.

Field Trip: Oscar Night at the Four Points by Sheraton 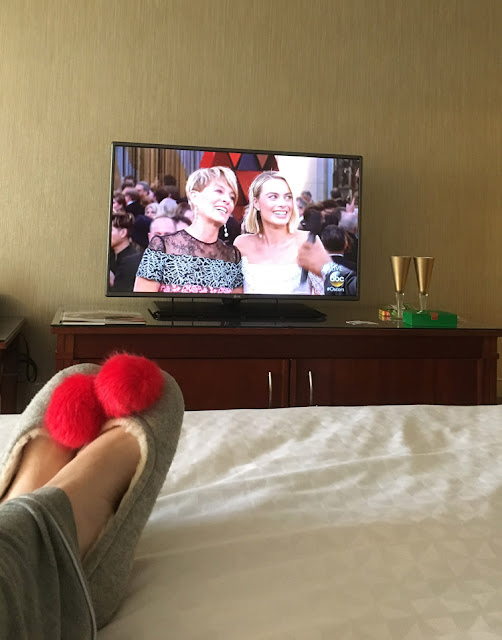 At some point a long time ago we got rid of our cable and never looked back, relying instead on Netflix, Hulu and Youtube to keep us up to date with our tv and movies. The only thing missing for me, and it's a big one, is awards shows. There's just something about the red carpet, and seeing all the artists being recognized for their art. This year's Oscars was one I was really interested in with movies that have both entertained us, and rocked us. 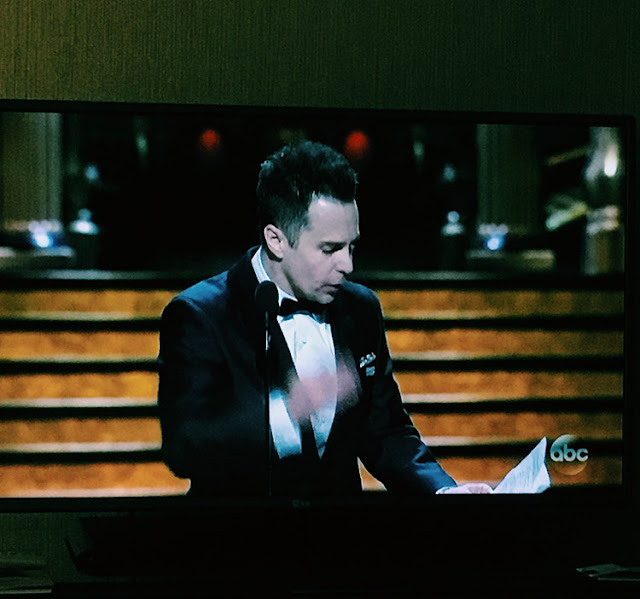 Thankfully I have a loving husband who decided to treat me this year to cable in the funnest way possible. He set us up with an overnight stay at a nearby hotel with cable so that we could watch the 90th Academy Awards. We chose the Four Points by Sheraton Hotel since it's minutes away from home, has cable, and has a pool which is helpful for bribing our girls to bring us take-out if needed in exchange for swimming!
This may sound kind of extreme but it wasn't too crazy. It has been a while since we took the time for a date night. And an overnight was fairly reasonable. 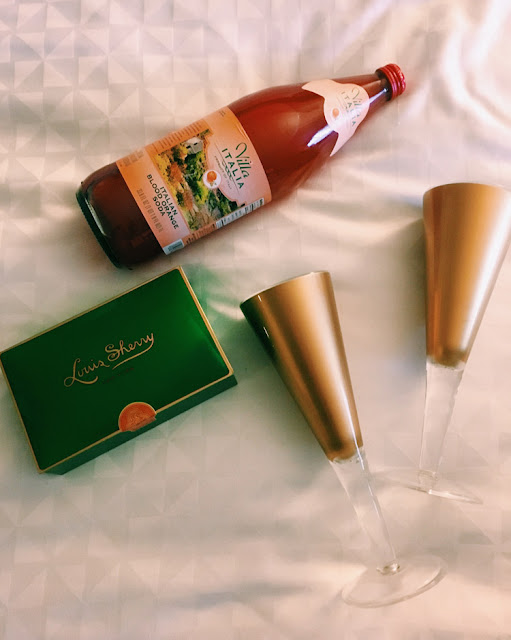 To make it a celebration I packed along some unbreakable champagne glasses and my Valentine chocolates that had yet to be devoured. We brought along various movie treats though there is a chance of real movie popcorn if that bribing works. 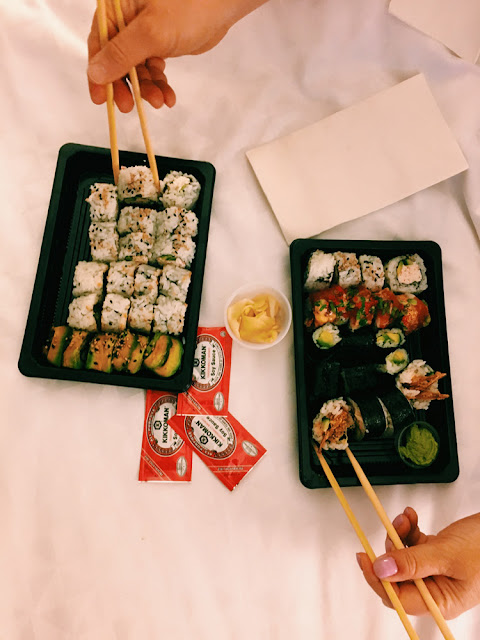 Though we are a typically active family, there is something so fun about getting into your jammies in the afternoon and just snuggling up and watching the red carpet and the Oscars. Our girls went and got us movie popcorn for an extra treat. And also a dinner of sushi! 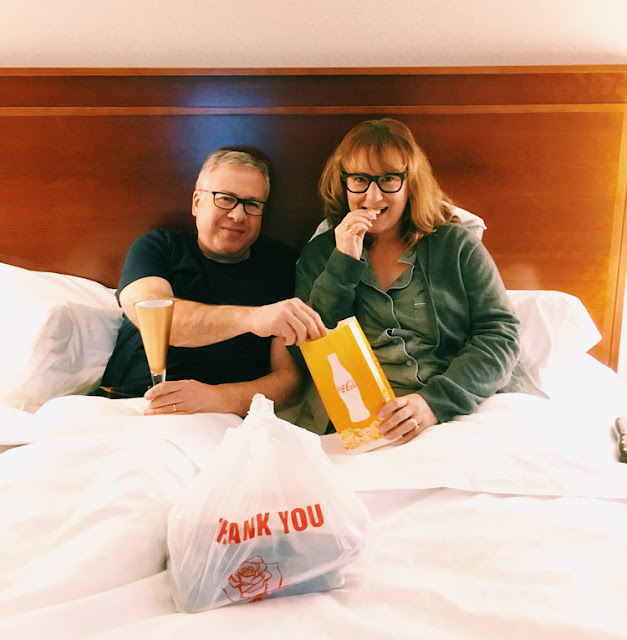 The night was a really fun break in the stress of Steve starting a new job, Sam in the process of dealing with preparing college, and just all the stuff of life. Sometimes all we need is a little reset. Do you ever do something goofy like this? Please tell me if you have any fun ideas that we can use in the future!